Razer Phone 2 unveiled with notable improvements to screen and camera

The new Razer Phone 2 is an entertainment powerhouse for mobile gaming with special features and nice improvements over the original.

A peek at the key features of Razer Phone 2 reveals that the screen is a 5.7” IGZO LCD panel with QHD resolution that is 50% brighter(580 nits) than the predecessor’s. Razer believes 16:9 is best for multimedia. It is purported that this new panel is better at preserving details in dark scenes. 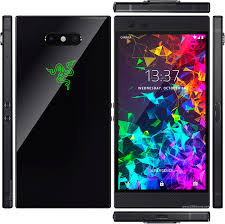 The new 4,000mAh battery supports QuickCharge 4.0+ as well as fast Qi wireless charging (15W max). The back of the Razer Phone 2 is made of glass to accommodate the wireless charging while the body is still CNC-machined aluminum. It’s now water resistant with an IP67 rating.

The logo on the back is a RGB backlit and supports Chroma - means that the Razer logo on the back matches the color of its LED lights to the lights on the phone. There’s no 3.5mm headphone jack for the Razer Phone 2, but Razer bundles a 24-bit DAC dongle with it.

The improved dual camera on the back of Razer Phone 2 sports new Sony image sensors. The main 12MP image sensor gets a Dual Pixel AF, an optical image stabilization (OIS) and f/1.75 lens. The secondary one is a 12MP camera with a 2x telephoto lens (f/2.6).

Phone’s 2160p video capture now goes up to 60fps whereas there is a 120fps slow-motion mode at 1080p. The selfie camera stays largely the same; an 8MP fixed-focus shooter, however it has gained support for 1080p @ 60fps video capture.

For audio, Razer Phone 2 is equipped with powerful Dolby Atmos-certified front-facing stereo speakers, each is fed by a dedicated amplifier.

The phone will come pre-installed with Android 8.1 Oreo, but Razer is promising an OS upgrade in the near future.