Honor V20 - frameless flagship with an Infinity-O screen, 48 megapixel camera from Sony and a Kirin 980 processor

The market of mobile gadgets is developing very fast: every year power is increased, cameras are improved, power consumption is reduced, appearance is improved. Since many smartphones are evaluated primarily by appearance, in recent years, companies have begun to pay the most attention to this aspect. Two years ago the frame reduction race began which presented us with pretty devices with full-screen design. As a result, we saw smartphones with thin frames at the top and bottom, devices with bangs, sliders, and also devices with teardrop-shaped cutouts. Nevertheless, designers of leading brands decided not to stop at this, because they want to surprise further. So there was an idea with a hole in the screen under the front camera, which would solve all the problems with frameless smartphones. No sooner said than done! Honor introduced model Honor V20 with a hole in the screen under the selfie camera. But not only the total framelessness can boast the device, since it was also equipped with a 48 MP camera, a powerful liquid-cooled processor and other interesting features. 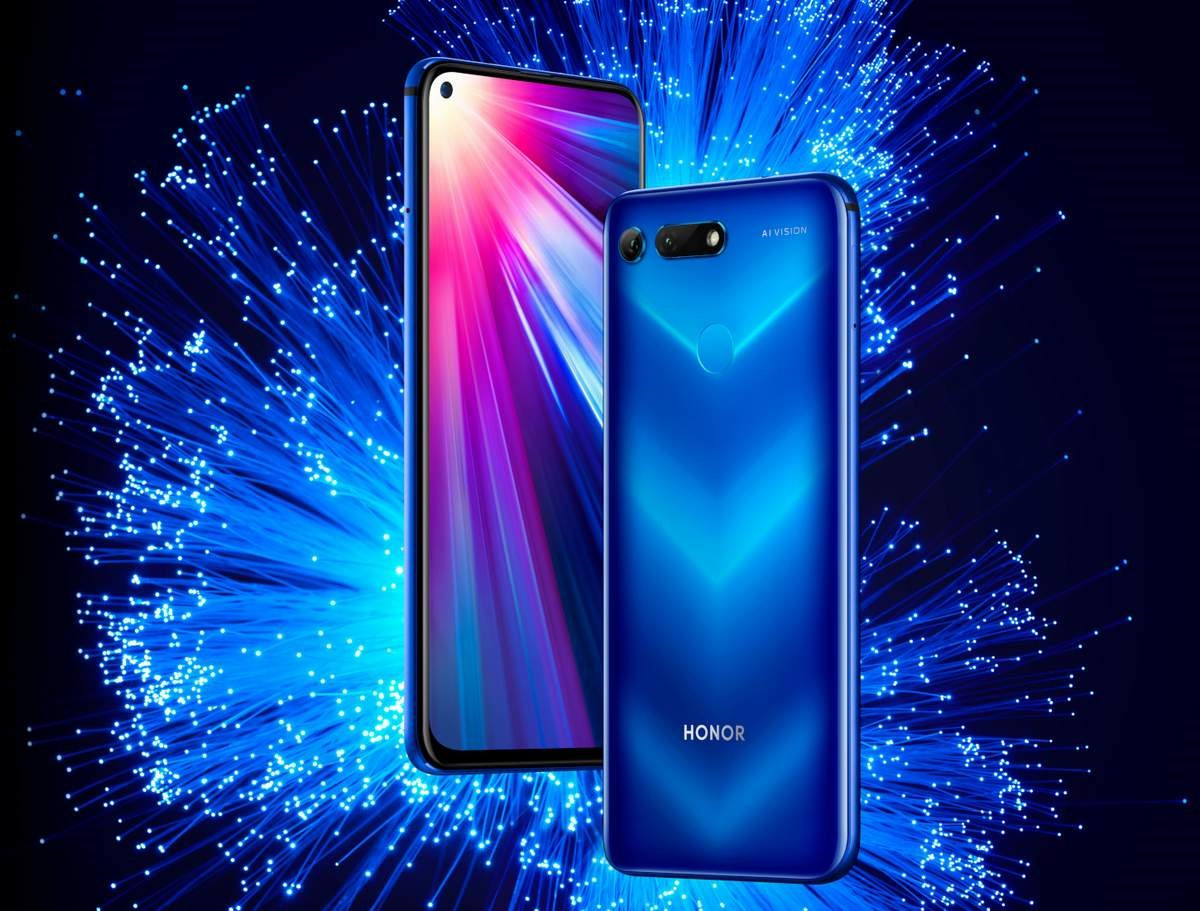 Honor V20 is not the first smartphone with a hole in the screen, but it is the first flagship with similar technology. Recently, Samsung introduced the Galaxy A8s with a hole in the display under the front camera, but Korean gadget is subflagman and besides Galaxy A8s has this hole the most - 6.5 mm in diameter versus 4.5 mm in the Honor V20.

Honor V20 is equipped with a large 6.4-inch display with a resolution of Full HD +, and aspect ratio is 19: 9. The smartphone is made entirely of tempered glass with a metal frame. The fingerprint scanner at the smartphone is not subscreen, but classic, located on the back cover. The heart of the device is the most powerful chipset Huawei HiSilicon Kirin 980 with a graphics subsystem Mali-G76. Available Honor V20 has the power of a double-neural computing unit, as well as 6/8 GB of RAM in conjunction with 128/256 GB ROM. Despite the energy efficiency of the chipset and its low operating temperatures, Honor decided to add a liquid cooling system so that in demanding games with long gaming there was no hint of throttling or overheating.

The novelty is very interesting in terms of photo capabilities, since the Honor V20 turned out to be the world's first 48 megapixel smartphone from Sony with IMX586 sensor. The aperture of the lens is f / 1.8 and pixel size ranges from 0.8 μm to 1.6 μm. With good lighting entire 48 Mp (0.8 µm) will be fully utilized, but in case of insufficient light, technology of combining 4 in 1 pixels will lowers the resolution up to 12 Mp (1.6 µm). Also there is AI HDR for high-quality photos support. In addition, the main camera is supplemented with a 3D ToF stereo lens to create volumetric realistic models and the performance of the AR augmented reality. A 25 megapixel sensor with f / 2.0 aperture is used as a selfie camera.

For the autonomy of the smartphone meets the 4000 mAh battery with the ability to fast charge, the power of which reaches 22.5 watts. For charging, use the Type-C port. In addition, the Honor V20 out of the box runs on the Android 9 Pie OS with the Magic UI 2.0.1 shell.

Honor V20 - release date and cost of the flagship

In China, the model will go on sale January 22, 2019. On the same day, the international presentation of the Honor V20 will take place, after which the smartphone will be sold outside of the Middle Kingdom.